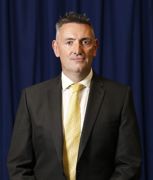 William Manning graduated from Kings' College London with a degree in French and Latin in 1994 and left university to pursue arabic studies in Egypt and then work in industry before completing a PGCE with Oxford University in 1999. William worked as a teacher of languages and a Head of Year at the Marlborough School, Woodstock and then subsequently as a Head of Year and Assistant Headteacher with pastoral responsibilities at Tanglin Trust School, Singapore.

William, a keen sportsman, lives with his wife and three children in Freeland.

Briony Bowers is a graduate of Cambridge University; she began her teaching career at a mixed school in London before taking up a post as an English teacher at St Birinus School. Having worked at both St Birinus and Didcot Girls’ School for the past twenty years, Briony is now in her tenth year of senior leadership with the Ridgway Education Trust. Her previous roles have included Assistant Headteacher for Inclusion, Deputy Headteacher for Teaching and Learning at Didcot Girls’ School and Director of Teaching School.

Briony is a Specialist Leader of Education for the Didcot Girls’ School Teaching School Alliance. She has particular expertise in improving teaching and learning, including managing change, systems for quality assurance, and professional development for teachers and middle leaders.

Briony has recently completed her first novel and she enjoys sailing on the south coast with her husband and dog.

Graeme Irwin graduated from Swansea University with a degree in Geography. After spending a year volunteering for a campus-based charity, Graeme returned to his studies in order to complete his PGCE in Geography Teaching. Starting his teaching career at Didcot Girls’ School, Graeme experienced a range of roles, including Head of Year & Assistant Headteacher, Head of Key Stage 3 before taking up a post in Hampshire as Deputy Headteacher of a rural Secondary School for three years.
Graeme returned to the Ridgeway Education Trust in January 2017, becoming Deputy Headteacher of St. Birinus School September 2017.
Graeme lives locally with his wife and two young children and is a passionate sports fan, particularly as a supporter of the Scottish Rugby team.

James Cross graduated from the University of Oxford with a degree in English Literature and Language, before completing a PGCE at the University of Keele and teaching in the West Midlands. He returned to Oxfordshire in 2014 to work at Didcot Girls’ School, where has held a variety of roles, most recently as Head of English and Associate Senior Leader. He has also worked across a number of schools as a Specialist Leader of Education, supporting English departments with curriculum development and raising standards.

James is responsible for the Didcot Sixth Form, working across both St Birinus School and Didcot Girls' School. He lives in Didcot, though hails originally from the North, and enjoys anything that takes him to more mountainous terrain.

Julia Hopkins graduated from the University of Gloucestershire with a degree in English Literature and Studies in Modern Writing in 2001. She then spent two years working as part of the occupational therapy team at a dual diagnosis unit for adults with learning difficulties and mental health illnesses at Oxfordshire NHS Learning Disability Trust. Following this Julia qualified as a teacher in 2004 and began teaching English at St Birinus in September of the same year. Prior to being appointed as Assistant Head Teacher, Julia held a range of posts across the school, including Head of English, Head of Year and Literacy Co-ordinator.

As Assistant Head Teacher Julia is responsible for ensuring consistently high quality teaching and learning at St Birinus and supporting its delivery through a programme of carefully designed CPD tailored to deliver the best for the students.

Marianna Tottman graduated with a first class honours degree in Drama in 2004 and went on to complete a PGCE at Reading university. Having worked in several schools in Hampshire and Berkshire, Marianna spent seven years as Head of Performing Arts at a school in south Oxfordshire, before moving to St Birinus as Assistant Headteacher in 2016.
Marianna is responsible for student behaviour and attendance as well as being the school's Safeguarding lead. Marianna lives in Newbury with her husband. She loves being out in the countryside with her horse and dog and is a competitive dressage rider.
mtottman@st-birinus.oxon.sch.uk

Zoe Gothard graduated from the London College of Printing with a degree in Photography and spent some happy years freelancing in London and worldwide working for different companies, including the London Borough of Brent and the International Childcare Trust. After three years she decided to retrain in Computing, gaining a Masters in Computing from Oxford Brookes University and working as a computer programmer for Focus Micro Systems in Oxford. Wanting to spend time with her young children during their holidays she completed a PGCE and found her true vocation in teaching.
Zoe has a love of reading fiction and also enjoys finding out more about education research and the twitter Maths community.
zgothard@st-birinus.oxon.sch.uk

Miss Roberts' Thought for the Term

View Full Calendar
Back to Top