Schools must be about more than academia

Very sadly, the Headteacher who gave me my first job in teaching passed away recently. He was a remarkable man: passionate, committed, caring, kind and, like all great Headteachers, quite eccentric. He built a school up from being generally quite average in everything it did to permeating excellence, high standards and a sense of ambition. He retired just as Ofsted was gaining traction and was not preoccupied by such judgements but was naturally proud of the legacy which has had the school being judged as Outstanding several times.

He was a great Headteacher who knew the results – who had achieved highly, who had secured places at competitive universities, who had struggled and achieved, who had overcome adversity. These were all important. But he drove the school forward through building ethos and he did this through the celebration of extra-curricular activities. For him the markers of when and how the school was progressing was a match-winning try for the 1st XV against tough opponents, a wonderful solo in a music concert or a stand-out performance in a school production. These things meant that the students were part of something, that these achievements were valued and significant and that they were integral to the school’s community – some had legendary status!

Extra-curricular activities are important for these very reasons. They are what we remember from school, what shapes us, develops us and forms us in to the adults we become. At St Birinus we have an exceptional range of extra-curricular activities: the classic triumvirate of music, drama and a plethora of sports but so much more crossing subjects and disciplines, indoors and outdoors, on site and in this country and beyond.

Most of our students don’t play Warhammer. For many of them sport or music or drama are vibrant interests, sometimes to dip in and out of, sometimes to play or perform to a high standard, often just to take part in with others. The students who play Warhammer may take part in these activities but they are particularly passionate about participating in Warhammer and there is a lot I like about them as a group.  Some of them struggle with aspects of school but within the Warhammer Club they thrive.

Warhammer players at St Birinus are part of something – part of our school community but also part of their own group in which they feel valued and significant. If it is a microcosm of our school then that is fantastic and something to be celebrated. It makes a statement about the kind of school which we are and I think my first Headteacher as a teacher would approve. 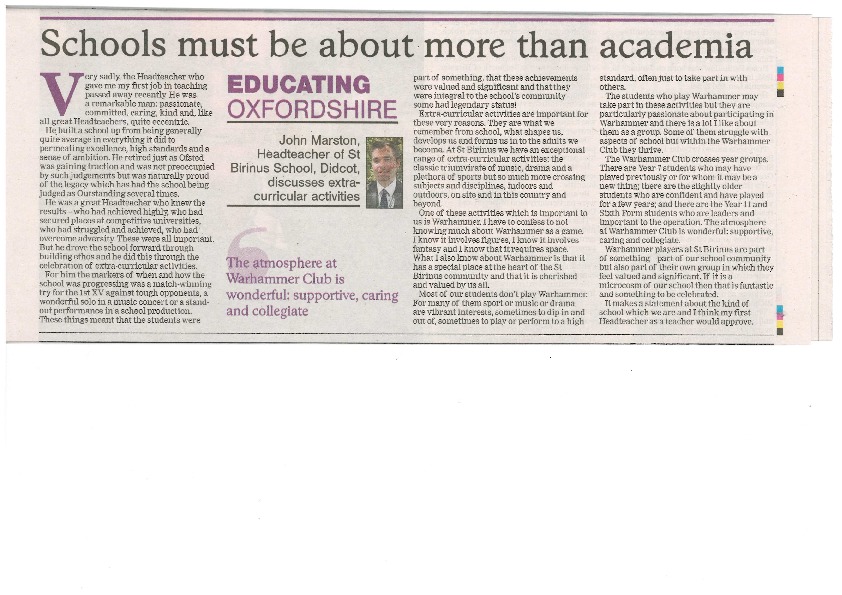